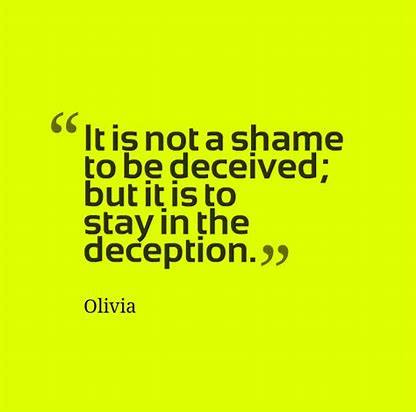 Deception is Part of Human Nature and Animal Behaviour

It can be surprising to many but deception has been a human trait since life began. There is nothing novel about it, and nothing too suggest that it has diminished or increased as time passes. Deceit exists everywhere as a part of human nature and creature behaviour.

One of the main reasons for deception is the fact that it will help all living things to survive. Even a chameleon will change colour to avoid a predator. It is used on the internet to receive a date and it’s practised in business to baffle competitors.

Biologically it can be found across the spectrum of reptiles, birds, fish, mammals, insects and many plants. Invertebrates and bacteria display it too. So we might be forgiven for concluding that where there’s life, there is deceit.

People are the masters of deceit and practice it more often than all other species combined. Our deception is more elegant and we have significantly more reasons to utilise it. Maybe this is because our brains are comparatively bigger and more developed than most species. However, whilst white lies could possibly be acceptable in our society as well as expected or demanded on event, there are situations when lying is individually destructive.

When deception is detrimental, polygraph machines are invaluable in exposing it.

Lie detection technologies is relatively new and certainly more civilised, compared to the historic quest for the truth.

By way of instance, the Chinese (around 1000 BC) used a readily available commodity to determine if someone was lying or not. The alleged liar would be required to spend a little time with a mouthful of dry rice and spit it out. If the rice was not moist and stayed dry, it had been considered evidence of deceit and remorse. The physiological basis of this assertion was that anxiety and stress dries the mouth area. Of course there might be a number of explanations for why a defendant may be scared or fearful but irrespective of this, if you failed the dry mouth test, you’d be executed.

A couple of hundred years later around 300 to 250 BC a Greek doctor (Erasistratus) quantified the pulse in an attempt to discover deceit. In 1921 the identical method would eventually become a part of polygraph exams and is still employed today.

Other uncivilised techniques, contained trials by ordeal. These were especially common in Europe and were occasionally referred to as”Judgements of God”. Defendants were put specific barbaric tasks to show their innocence. Frequently they entailed fire or water. These trials were based on the premise that God would not allow an innocent man to endure. In areas of Eastern Europe, throughout the 11th century, even some suspect had to plunge a hand into boiling water and leave it underwater for a predetermined period of time. In the event the hand surfaced unblemished (that’s impossible) that it’proved’ the accused was naive.

Another impossible evaluation involved cold water. The accused could be placed in a sack that would then be tied with a rope. The sack was submerged in cold water however in case the suspect emerged alive, they’d be judged . It was deemed, that water which is used in baptising, wouldn’t accept the person and therefore they were lying.

You will find various ways the cold water test evolved over years. It was often used on girls suspected of being witches. Who can forget the ducking stools?

From the late 1500s courts in the Netherlands commissioned a college to study the boiling water method and its effectiveness in discovering deception. Logic prevailed and it was decided the test did not prove whether a suspect was lying or not. On the other hand, the cold water system continued to be utilised through the 1700s until it had been abolished.

Walking over hot coals or carrying hot irons for an extended time period were two approaches used to define innocence. If no flaws were evident after the ordeal, they healed quickly, there was no guilt. You may imagine how often that happened!

Luckily, as civilisation progressed and science evolved, people started to appreciate that tests based on divine intervention were unreliable. We have state of the art polygraph machines to determine deception with fully competent and large trained examiners who can achieve accuracy levels of over 90%. Contact us today to discuss your test with a fully qualified examiner.