Can A Psychopath Or A Pathological Liar Pass A Polygraph Test?

Can A Psychopath Or A Pathological Liar Pass A Polygraph Test?

A few years ago, I was listening to a radio interview featuring a well-known psychiatrist from the UCLA School of Medicine. At some point, the interviewer asked him to give his opinion of the validity and usefulness of polygraph tests. The psychiatrist’s answer was that most polygraph tests are useless, since so many criminals are psychopaths, and psychopaths (being pathological liars) can easily beat the test. Because of his credentials and notoriety, I’m sure that most people believed what he said. For my part, I just sat there and thought to myself, “The shrink doesn’t know what he’s talking about.” He was merely spouting off about his personal opinions without having taken the trouble to pick up one or two scientific journals. If he had done just a little reading, he wouldn’t have made such a fool of himself. Polygraph examiners test psychopaths all the time. (By the way, if you don’t know much about psychopaths and sociopaths, you should rent a copy of “Goodfellas”. The movie’s vivid portrayal of mobsters gives a fairly accurate view into the mindset of a psychopath.) Psychopaths and sociopaths comprise a large segment of the criminal population (including white-collar criminals). These are people who psychologists call “antisocial” – their activities and behaviors violate the basic rules that a society must have in order to function well. Many of the characteristics of a psychopath lead some people to believe that they can “beat” a polygraph test at will. For example, psychopaths are pathological liars, they don’t have any remorse or guilt for their crimes or sympathy for their victims, and they don’t accept responsibility for their own actions. Basically, they’re not particularly concerned about the bad things that they do, especially when those bad things bring them money or power. So, how do we know that psychopaths can’t beat us? We do a little scientific research. One of the handy things about research is that it cuts through theoretical arguments, and gets down to the essential basic issue which, in this case, is “Can psychopaths produce false negative outcomes at will?” 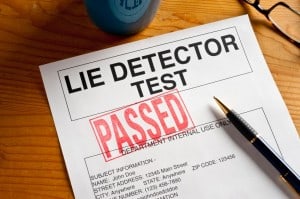 We have known the answer to that question since 1978, when the first well-designed scientific study on the issue was conducted in British Columbia, Canada. One of the principal scientists performing the study was Dr. Robert Hare, a world-renowned expert in the study and identification of psychopaths. Dr. Hare led a research team that conducted a mock-crime laboratory study using prisoners who were incarcerated in a Canadian prison. He first selected a group of prisoners who were clinically diagnosed as psychopaths (Dr. Hare conducted the diagnoses himself). Then, another group of prisoners was chosen who Dr. Hare diagnosed as not being psychopaths. Half of the psychopaths and half of the non-psychopaths then committed a mock crime. The other prisoners in the study were “innocent” of that crime. All of the subjects were given a Utah Zone of Comparison Test to determine if they were truthful or deceptive when answering relevant questions about the crime. All subjects were tested by a federally trained examiner. Accuracy of decisions for the non-psychopath group was about the same as previous research had shown. The non-psychopaths were accurately detected as being DI or NDI in 95% of the cases (excluding inconclusives). The really startling piece of information, though, was that the psychopaths were accurately detected at a slightly higher rate, 95.8%.

When the polygraph charts were analyzed at a later time, it was also shown that psychopaths produced stronger EDRs than nonpsychopaths and also had greater heart rate slowing when they were being deceptive. One more juicy piece of information from the experiment: no subject, psychopath or otherwise, was able to beat the test. There were no false negative errors. Since this experiment was published, other studies have also shown that psychopaths and other poorly socialized people do not have an advantage when it coming to “beating the test”. Why is this? It may be that they have the same fear of detection and its consequences as does anybody else. It may be that the responses of our autonomic nervous system are so strong that they can’t be overridden even by somebody with no conscience. Whatever the ultimate explanation, we have strong, objective, scientific proof that our accuracy rates with psychopaths and sociopaths are no different than they are with anybody else. I would strongly suggest that you get copies of the reports listed below. If anybody ever tells you that you can be beat by a psychopath, you’ll be able to give him a reading assignment.